The Diesel Particulate Filter (DPF) removes particulates from Diesel engine exhaust through physical filtration. although Many types of filters are available, but the most common is a ceramic monolith (cordierite or silicon carbide) with a honeycomb structure.

The particulate filter is similar to catalyst convertes (cross-section - honeycomb). However, the channels in the monolith have a larger diameter and porous walls. In addition, they are coated with a catalytic coating that forms the foundation for the catalytic metal particles. The exhaust gases go through such an obstacle must squeeze through the porous walls leaving larger particles trapped inside the plugged channels. 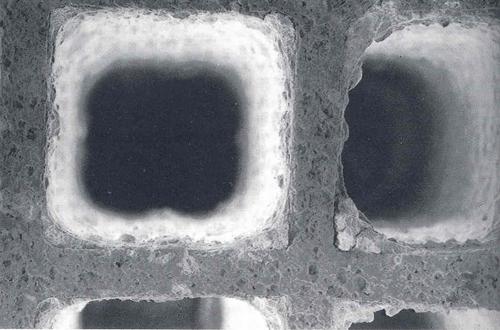 Catalytic coating materials include inorganic non-noble metal oxides such as alumina, silicon oxide, cerium oxide, titanium dioxide, zirconium oxide, and zeolites. Some of them are used as catalyst carriers, others are added to the catalytic coating as promoters or stabilizers, while others have catalytic activity.

The noble metal catalyst (s) may be present in the catalytic slurry or they are used in a second step called impregnation. During impregnation, the catalytically coated monolith is immersed in an aqueous solution containing catalytic precursors. The catalyst is dried and calcined to its final form. During calcination, the catalyst precursors decompose to form a final catalyst, usually a metal or a metal oxide. The most common catalysts are platinum group (PGM) metals, such as platinum (Pt), palladium (Pd) and rhodium (Rh) alone.

Ceramic (protective) mat
It is wrapped around a monolith. Provides thermal insulation, protection against mechanical shocks and vibrations of the vehicle.